Then the Great Goddess Śrī spoke the following words to the Bhagavān: “Lord Bhagavān, always and ever, I, the Great Goddess Śrī, shall bring an abundance of all necessary items to the monk who expounds the Dharma. He will have freedom from busy work and poverty, attain an expansive mind; and have a blissful mind, day and night. Coming to an authentic understanding of all the various words and syllables of this Sovereign King of Sūtra Teachings, the Transcendent Golden Light, he will realize them in full, and will utter them genuinely for the sake of sentient beings who have planted roots of virtue under hundreds of billions of Buddhas; so that this Sovereign King of Sūtra Teachings, the Transcendent Golden Light remains in the world for a long time and does not fade quickly; so that sentient beings will listen to this Sovereign King of Sūtra Teachings, the Transcendent Golden Light, experience the happiness and gods and humans for many hundreds of thousands of millions of billions of eons, be free from famine, and have excellent crops; so that those sentient beings too become blissful through all that promotes happiness, can associate with the Tathāgata, and manifestly and completely awaken to Unsurpassed, Perfect Awakening (anuttarā-samyak-saṃbodhi); and so that the entire stream of suffering for sentient beings in the hells, the animal kingdom, and the world of Yama may be completely cut off.”

“For example, I shall delight the monk who expounds the Dharma with clothing, food, bedding, seats, medicines for illness, healing substances, tools and all kinds of other provisions, as well.”

“The Great Goddess Śrī has generated roots of virtue under one known as the Tathāgata, the Arhat, the Samyaksaṃbuddha, Ratnakusumaguṇasāgaravaidūryakānchañasuvarṇakanakābhāsaśrī. Because of that, she now directs her thought into all kinds of directions, watches over all kinds of directions, and travels in all kinds of directions; and in all those directions where she goes, she brings happiness to many hundreds of thousands of millions of billions of sentient beings; causing them to never have a shortage of food, drink, wealth, grain, shells, gold, gems, pearls, blue sapphire, conches, crystals, coral, silver and unwrought gold, and other useful things as well. Those sentient beings receive everything they need.”

“Pay homage to that Tathāgata (Ratnakusumaguṇasāgaravaidūryakānchañasuvarṇakanakābhāsaśrī), by the power of the Goddess Śrī. Offer scents, flowers and incense, as well. For those who recite the name of the Great Goddess Śrī (Mahādevi Śrī) three times; and thereupon offer incense, scents, flowers and a variety of tastes, as well, their accumulated store of grain will greatly increase. It is therefore said:

Wax shall the earth nutrients in the ground,
Ecstatic shall the gods ever be.
Flourish shall the fruits, crops, shrubs and woods;
And manifold harvests, indeed.

“The great goddess Śrī thinks about those sentient beings who say [or intone] the name of the Sovereign King of Sūtra Teachings, the Transcendent Golden Light(Suvarṇaprabhā Sottama Sūtrendra Rāja Sūtra); and accords them great glory.”

Then the Bhagavān congratulated the Great Goddess Śrī, saying: “Well done. Well done! Because you, O Goddess, recounted your previous activities, you have thereby made offerings to the Tathāgatas, helped limitless sentient beings, and benefited them with happiness; and you will never experience exhaustion of the positive potential that comes from widely spreading this Sūtra.”

FROM THE SOVEREIGN KING OF SŪTRA TEACHINGS, THE TRANSCENDENT GOLDEN LIGHT, THIS WAS THE SIXTEENTH CHAPTER: ‘THE GODDESS ŚRĪ’.

You can find the text at The Sūtra of Golden Light: The 29 Chapter Version, Chapter 16 – The Goddess Śrī 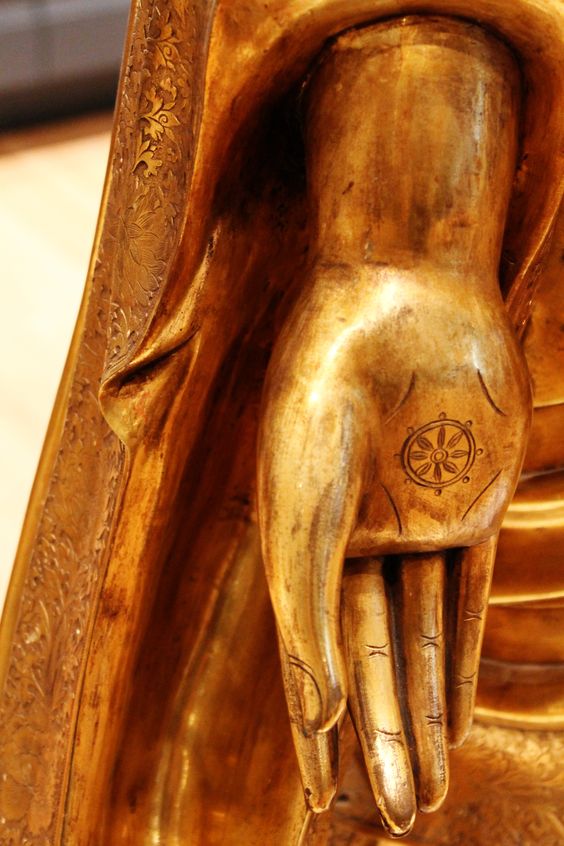