You can also read this on the official website at: http://tibetanlotussutra.blogspot.com/2015/01/first-preview-of-chapter-10-dharma.html

Then, the Bhagavān gave teaching to the eighty thousand Bodhisattvas such as Bodhisattva Medicine King in the following words: “King of Medicine! Do you see amongst the assembly those gods, nāgas, yakṣas, kinnaras, mahoragas, humans and non-humans, monks, nuns, laymen and laywomen, many of those in the Śrāvaka Vehicle and of those in the Bodhisattva Vehicle, who have heard this section of Dharma directly from the Bhagavān?”

The Bhagavān gave teaching: “King of Medicine! All of them are Bodhisattva-Mahāsattvas. For any of they in this retinue who thus heard even as little as one verse, heard one word, and those who even simply gave rise to a single thought of rejoicing in this Sūtra, any among the four-fold assembly, O King of Medicine, I predict for all of them the unsurpassable, perfectly complete Awakening.”

“King of Medicine! Any of those sons or daughters of good lineage who, after the Tathāgata has passed into Complete Nirvāṇa, listen to this section of Dharma and hear even as little as one of its verses, and then come to rejoice in it with the generation of even just a single thought, O King of Medicine, I predict for all of them the unsurpassable, perfectly complete Awakening.”

“King of Medicine! You should understand that those sons or daughters of good lineage, out of compassionate love for sentient beings, have taken birth as humans in this world.”

‘The Noble White Lotus of the Sublime Dharma: A Mahāyāna Scripture’

Translated from Tibetan by Erick Tsiknopoulos and the Sugatagarbha Translation Group

At that time, the four assemblies [of monks, nuns, male and female lay practitioners] around the Bhagavān fully circumambulated, and attending to him, they respected, venerated, honored, made offerings, extolled and supplicated him. Thereupon, he expounded an explanation of the type of Dharma known as ‘The Great Definitive Teaching’, a Sūtra of extremely great vastness instructed to Bodhisattvas, fully embraced by all Buddhas. There on that very Dharma seat, with cross-legged position, he rested equanimously in the deep meditative concentration known as ‘The Abode of the Limitless Definitive Teaching’, and as he abided there, his body became unmoving, and his mind unwavering.

At that time, the monks, nuns, laymen, laywomen, nāgas, yakṣas, gandharvas, demigods, garuḍas, kinnaras, mahoragas, humans and non-humans, kings of small countries, those who ruled over a powerful dominion, and those who ruled over the dominion of the four continents who had thus gathered in that assembly and were there arrayed, along with their retinues: all of them stood there looking at the Bhagavān, for they had become amazed, had become astronished, and had become most joyful.

Then, the Bodhisattva-Mahāsattva Maitreya had the thought: “Incredible! By what cause has this display of great signs and miracles here come about? Why has the Bhagavān shown such great signs and miracles? For while the Bhagavān is equanimously immersed within deep meditative concentration, these sort of inconceivable great miracles of magic, these great amazing wonders have also come to appear: So who shall I ask about the meaning of this? Who is there that can provide an answer for the meaning of this here?”

‘The Noble White Lotus of the Sublime Dharma: A Mahāyāna Scripture’

Translated from Tibetan by Erick Tsiknopoulos and the Sugatagarbha Translation Group

Then, at that moment, the Bhagavān gave teaching in these verses:

Whenever I became a world-turning king,
At those times I offered the earth with its oceans,
And even its four continents, filled with precious things,
To all Victorious Ones of the past.

In all-encompassing search for the Dharmakāya,
There were no things, not previously dear and treasured,
Which I did not give away;
During numerous eons, I even gave away my treasured body.

Once I did this inconceivable eons in the past.
During the teaching-dispensation of the Sugata Jeweled Crest;
After that Sugata had passed into Nirvāṇa,
There arose a king called Excellent Manifestation.

He was a world-turning king ruling with mastery over the four continents,
Reigning mightily with a reach as far as the oceans,
Therefore he was said to be a sovereign king:
And once, in his royal palace, that transcendent king fell asleep.

In his dream, he heard the qualities of the Buddha,
And dreamt of the Dharma teacher Jewel Abundance.
He saw him, distinctly lucid;
As he sat and expounded this King of Sūtras.

The king awoke from his sleep,
His whole body filled with joy.
Ecstatic, he excitedly came out of the royal quarters;
And went to the dwelling of the supreme Saṅgha of disciples.

There he made offerings to the disciples of the Victorious One,
Saying, “In this noble Saṅgha is there one ‘Jewel Abundance’,
A monk imbued with good qualities?”;
He asked everywhere after the Dharma teacher “Jewel Abundance”.

At that time, Jewel Abundance
Was staying in another hermitage,
Contemplating in detail this King of Sūtras;
While reciting it, and living in total happiness.

The monk Dharma teacher Jewel Abundance
Was powerfully blazing with brilliance, majesty and glory.
And as he sat there in that other hermitage,
At that time, he was shown to the king.

There the Dharma teacher Jewel Abundance,
Upheld the profound sphere of royal activity,
For he always taught what is known as Transcendent Golden Light:
The Sovereign King of Sūtras.

Bowing down to the feet of Jewel Abundance,
King Excellent Manifestation spoke these words:

“Transcendent Golden Light, the Sovereign King of Sūtras,
O one with face like full moon, I request you to explain.”
And thus to King Excellent Manifestation himself,
Jewel Abundance agreed to teach.

When this occurred, in all the three thousand worlds,
All the gods became intensely joyous.
At that time, the ruler of humans, there upon that earthen ground,
Which was clean, eminently special and unusual,
Sprinkled gem water and incense water;
Spread down loose flowers, and set up a throne.

Then the king exquisitely adorned the throne with parasols and victory banners,
And thousands of tassels.
The king also thoroughly sprinkled upon that throne transcendent sandalwoods;
In all sorts of varieties.

Devas and nāgas, asuras and centaurs,
Yakṣas and great serpents too,
Brought down a rain of divine coral tree flowers,
Powerfully and expansively upon that throne.

Those who had arrived, a thousand million billion gods wishing for the Dharma,
Beyond the reaches of thought,
As Jewel Abundance was appearing to leave;
Strewed sāl flowers with joy.

The Dharma teacher Jewel Abundance himself,
Washed thoroughly his body and dressed in clean clothes,
And proceeded to go close to that throne;
Pressed his palms together, and bowed down to it as well.

The god kings, gods and goddesses
Sat in the sky above, and brought down a rain of coral tree flowers,
And hundreds of thousands of cymbals;
Beyond the reaches of thought, which resounded with power.

Then Jewel Abundance, the monk Dharma teacher,
Being mindful of the thousand million Buddhas of the ten directions,
Beyond the reaches of thought;
Ascended the throne with concentration, and sat upon it.

He generated heartfelt love for all sentient beings,
And then also generated, authentically, the mind of compassion;
And then to the king Excellent Manifestation,
At that time taught this Sūtra.

And as the king sat with joined palms,
He rejoiced in every single word.
Through the force of the Dharma, tears shed from his eyes;
And his body was filled with joy.

In order to venerate this Sūtra,
At that time King Excellent Manifestation
Picked up the Wish-Fulfilling Gem, the king of jewels,
And for the sake of sentient beings, made this prayer:

“May a rain of ornaments endowed with the seven gems,
And precious jewels which bring well-being
To the sentient beings in this world
Descend upon this Earth.”

At that time, the seven kinds of gems
Armlets, necklaces and superb earrings,
And likewise food, clothing and drink also showered down,
Over the four continents comprehensively.

King Excellent Manifestation beheld this cascade of precious things,
Raining down upon the world,
And offered the gem-filled four continents;
For the Teachings of Jeweled Crest.

The Tathāgata Śākyamuni
Was the one known as King Excellent Manifestation.
It was I who, at that time, completely gave away the earth;
With its four continents, filled with precious things therein.

The one who to King Excellent Manifestation
At that time extensively taught this Sūtra,
Jewel Abundance, the Dharma teacher monk,
Became the Tathāgata Akṣobhya.

At the time I heard this Sūtra,
And rejoiced in every single word.
I, due to that very virtuous deed itself:
Listening to the Dharma and rejoicing,

Have permanently gained this body of golden hue and marks of hundredfold merit,
Lovely to behold and deeply beautiful to the eye,
Which gives strong delight to thousands of millions of gods;
And is joyful for living beings to behold.

For inconceivable eons I was an Indra;
And likewise a lord Brahmā, the wish-fulfiller.
I have rendered service to that which never has limit:
The unfathomable Tenfold Power.

From my listening to and rejoicing in this Sūtra,
The mass of positive potential was thus most limitless;
For in accordance with my wish, I have attained Awakening:
And the transcendent Dharmakāya have I gained.

FROM THE SOVEREIGN KING OF SŪTRAS, THE TRANSCENDENT GOLDEN LIGHT, THIS WAS THE TWENTY-FIRST CHAPTER: ‘EXCELLENT MANIFESTATION’.

Translated from the Tibetan by Erick Tsiknopoulos and the Sugatagarbha Translation Group. 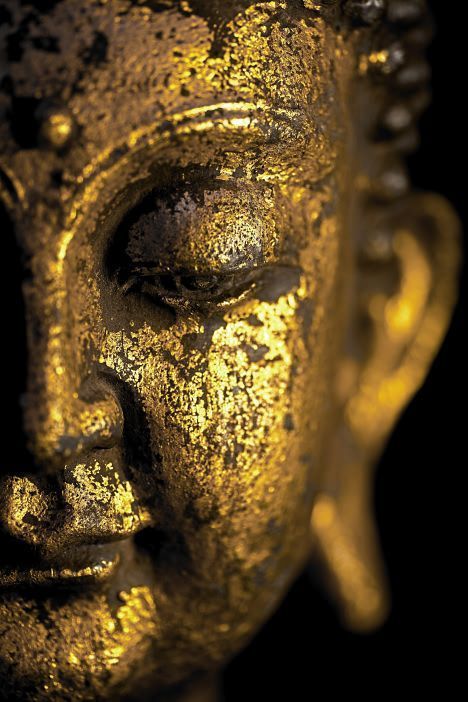